Highlights of the ASAPS 2005 Statistics on Cosmetic Surgery

"The surgical portion of the statistics show interesting results in the Breast Augmentation and breast lift areas," said Aesthetic Society president Mark L. Jewell, MD. “While some procedures are down, these areas continue to increase; breast augmentation by 9 percent and breast lift by 23 percent. This also marks the first year that we have segmented the device used for breast augmentation, saline or silicone. This should give us significant trending data when silicone devices are approved by the FDA.”

Top surgical and nonsurgical cosmetic procedures among ALL AMERICANS in 2005:

ASAPS, working with an independent research firm, compiled 9-year data for procedures performed 1997-2005 by multiple specialists, including but not limited to plastic surgeons certified by the American Board of Plastic Surgery. More than 14,000 questionnaires were mailed nationwide, and r esults of the survey were used to project national data. The survey data has a standard error of +/-3.61 percent at a 95 percent level of confidence.

Courtesey of The American Society for Aesthetic Plastic Surgery (ASAPS).

1. Lipoplasty (Liposuction) with 455,489 procedures performed, down five percent from last year. Interestingly, 21% of these procedures were ultrasound-assisted Lipoplasty (UAL)

2. Breast Augmentation with 364,610 procedures up nine percent from 2004. For the first time, we categorized saline vs. silicone augmentation. 83.4 percent of respondents used the saline device, 16.6 percent the silicone implant.

3. Blepharoplasty (cosmetic eyelid surgery) came in third with 231,467 procedures down 20 percent from 2004

4. Rhinoplasty (nose reshaping) is the forth most common procedure with 200,924 procedures performed, an increase of 21 percent over 2004

The top five nonsurgical cosmetic procedures in 2005 were:

4. Microdermabrasion is the fourth most popular procedure with 1.023,931 performed in 2005, a decrease of 7 percent over last year

The most common procedures for those 18 and under were Laser Hair Removal, Microdermabrasion, Rhinoplasty (Nose reshaping), Otoplasty (Cosmetic ear surgery) and Chemical Peel.

Figures and totals have been rounded to the nearest percent.

COURTESY OF THE AMERICAN SOCIETY FOR AESTHETIC PLASTIC SURGERY (ASAPS).

** With any surgical procedure, a revision or touch-up may sometime be necessary.

The American Society for Aesthetic Plastic Surgery's cosmetic surgery statistics are the most comprehensive collection of data available on the number of cosmetic surgical and nonsurgical procedures performed in the United States. ASAPS membership in the U.S. is restricted to American Board of Plastic Surgery certified physicians, but their statistics represent data from multiple specialties: plastic surgery, otolaryngology and dermatology. Currently, more than 14,000 surveys are distributed to board-certified physicians in these specialties, and survey results are used to project national totals.

Regional Fees and National Averages in 2005 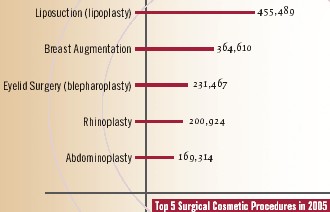 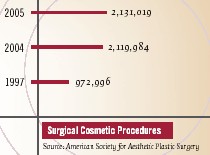 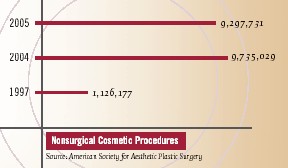 Statistics courtesy of The American Society for Aesthetic Plastic Surgery